The Promised Land: SLO and the PACIFIC coast

After a little Reiki energy and indulgent massages by James (Compassionate Dragon Healing) followed by scrumptious sub sandwiches courtesy of Bike Bakersfield, RASR was back on the road!  Many thanks again to Bike Bakersfield for their warm hospitality, cozy Bike Kitchen abode, dinner at Far East Cafe, and unwavering dedication and enthusiasm for bicycling as a safe and viable mode of transportation!  Our stop in Bakersfield, albeit brief, will not soon be forgotten!

As we peddled out of town under the steamy 95 degree midday heat, Bakersfield surprised us with a generous two-lane bike path!  Although the oil rigs were a little hard on the eyes after scenic Death Valley and Kern County, the Bakersfield bike path was not only an unforeseen luxury, but made our first 15 miles out of town more than doable.  After pedaling through solitary cropland for [what seemed like] miles after miles on the outskirts of Bakersfield, the thick city stench finally gave way to crisp air as we began the infamous ascent of the Temblor Range.  As we climbed and climbed, Bakersfield's blazing sun quickly faded into yet another photographed sunset.  Used to this sort of climbing by now, we grabbed our fluorescent, night lights, and an extra granola bar and hoped back on the saddle to enjoy another night ride :).  This time sharing the road with only our friendly owl friend, he matched us curve for curve through the arduous switchbacks.  After a short but impressively chilly descent into the valley, we set up camp for the night at Soda Lake in Carrizo Plain National Monument.

It is always a morning treat to wake up to a pristine landscape, known previously by shallow bicycle headlight of the previous night's ride.  This morning's treat_ lonely primitive grassland extending for miles amid ephemeral fog.  In addition to a second breakfast of delectable oranges and "Chaco Tacos", today's ride was fueled by thoughts of upcoming San Luis Obispo and the idealized Pacific Coast Highway!  With longtime family ranches, vineyards and wild purple lupines dotting the landscape, the bucolic scenery made the ride almost effortless as we "rolled" along State Hwy 58. 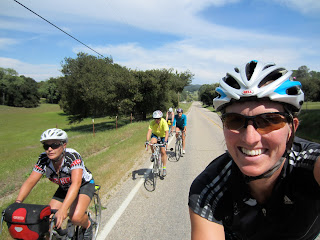 After re-sugaring with ice cream and iced coffee in Santa Margarita, we conquered the Cuesta Grand before letting out a "Wah WHOOO!"(echoed times 5) at first glimpse of the Pacific.  As we pedaled the final 8 miles of the day through SLO (San Luis Obispo), it was refreshing to see so many commuting cyclists as well as young kids out biking with their parents, not to mention the ubiquity of the bike lane.  Well done SLO!  We had heard great things from our friends in Bakersfield, and you did not fail to impress!  Greeted by another generous host, David, daughter, Sasha, new friends Nancy, Tom, their blind dachshund Rosie, Jim, and the sweet scent of flourishing oranges and lemons, we were spoiled with freshly squeezed OJ and homemade macaroni and cheese!  Cheers to a wonderful host, an evening of new friends, oranges, bicycle friendly SLO, and reaching the prized Pacific coast!  After 80 days on the road, RASR has arrived!

Posted by Kaitlynn
Posted by cww at 11:51 AM