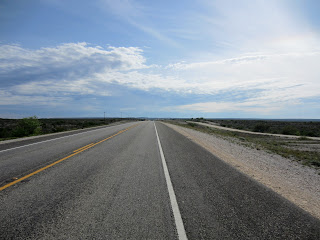 Wow. I said it before and I'll say it again. Wow. The last three days have been incredible. Riding west from Del Rio, our travels have been wonderful, but challenging.

On Wednesday, we continued to watch the vegetation and services diminish as we headed west. Keeping to Route 90 as we had the previous two days, a tailwind helped us to cover 110 miles with time for dinner in Sanderson before dark. We encountered our first major gain in elevation on Wednesday, as the mesas started rising up from the plains. When we coast downhill after a big climb, we've added more calls into our repertoire in addition to the "little piggy from the gieco commercial" noise that are inspired by the wildlife we see.
The following day we were up to the same milage and elevation challenge to the Fort Davis Mountains. With a slow start and a forceful headwind, the miles came very slowly. The last 10 miles into Marathon, our halfway point for the day, we hit a crazy storm throwing wind every which way and pelting rain hard onto our bare skin. As we stopped in town to indulge in our daily ice cream break we had to re-evaluate our plan for the day. We took a lengthy ride-break in Marathon and again in Alpine 30 miles later for a delicious dinner of grilled sandwiches at Eric's. 30 miles left in the day from Alpine to the Davis Mountains State Park, we rode off from dinner into a darkening sky. The temperature dropped and all our lights and reflective wear went on. With a bight moon and some of the darkest skies in the country, we were able to see our surroundings even in the night. We weaved across the road as we tried to star-gaze and ride at the same time up the mountains - luckily there wasn't any traffic. Evening is the most active time for most desert wildlife, and we got our share Thursday night! Multiple herds of javelinas scampered by, deer sprinted across the road, and Stephanie even saved a skunk (her spirit animal!) from getting run over. We are far from the turtle-saving days, in terms of wildlife. Even the just the memory of the vastness and stillness of that evening brings chills to my skin. Thankfully Jane was able to drive ahead and get our campsite figured out so everything was ready when we pulled in many hours after sunset.

Friday blessed us with a day off after the double-header 110+ mile days. We decided to use our time in this part of the country to the fullest extent by taking the day to drive down to the famous Big Bend National Park. The trip was almost 2 hours by car from where we were staying, but well worth the drive. As the rock enthusiast of the group, my interest in the scenery had been growing as the plants diminished and the rocks flourished in the previous few days. Get ready for a geology lesson: We've been traveling from flat-lying Permian sedimentary rocks through ancient fold-and-thrust belts and to the igneous rocks of the Davis Mountains and Chisos Mountains of Big Bend fame. For our lodging, we found a great warmshowers host who worked at the McDonald Observatory and lived right up on the mountain by the observatories. From the State Park where we had stayed the night before, it was about 13 miles and 1500 feet of elevation, a section of the ride we didn't want to pass up just because it was our day off. So, after returning to the state park from our long side-trip to Big Bend, we unloaded our bikes and put on our helmets for a quick hop, skip, and a jump up to the highest peaks of the range. It was not a hop, skip, and a jump, but with rested legs we were happy to take the challenge. We arrived in time for a quick dinner and then had perfect timing to make a "Star Party" hosted by the visitor center. The Star Party included an extensive constellation tour and 6 telescopes set up to discover a different part of our night sky, from the craters of the moon to the rings of Saturn to M3, a distant ancient (well, what isn't up there?) globular galaxy. Sleeping under the stars for the second night in a row, Stephanie and Jeanie were able to view many shooting stars (theoretically meteors) as they dozed off, dreaming of smoother roads and riding downhill.

It has been an incredibly eventful week, although we haven't had any "Safe Routes" events for many days. The four of us have pretty much got a daily routine down, although it is really hard to blend days together when each presents such new and different scenery and experiences. Generally, we wake up between 7 and 7:30, take about an hour to get breakfast (coffee *critical - especially for Jeanie*, cereal or oatmeal with peanut butter, maybe a piece of fruit), get geared up with sunscreen and pumped tires, and then hit the road hoping for as many miles before lunch as possible. By late morning we're ready for second breakfast (maybe half a nutella sandwich), and possibly time to switch drivers. We generally switch drivers/make a stop every 10 to 15 miles to stretch/grab a snack/check in/refill tire air. Sometime between noon and 1pm we're super hungry for lunch, which can be from 30-45 mins. After lunch and a reapplication of sunscreen, we're off again for our 10-15 mile stop routine. Late afternoon, or as available, we stop at a Dairy Queen or if we have to just a convenience store for our daily ice cream treat and moral booster. If we're on track and the headwinds haven't been beating us up too bad, we arrive at our destination around 7 for dinner/shower/blog/learneverythingaboutthehost. Ideally before 11, we're tucked away in our sleeping bags or beds, resting up to do the same thing the next day. AND if we have some sort of school assembly or local event, that's a whole other story...

Well, we're still just on the edge of civilization out here in West Texas, so sorry it's been awhile. We're having a blast, alive and well.