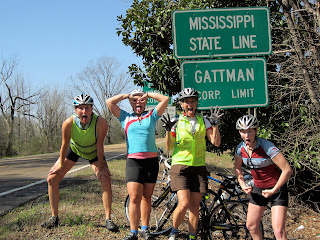 Three days from Birmingham and we’ve added a new talent: “storm-chasers” or maybe “storm-dodgers.”  (We were asked by a passer-by at a truck stop if we were storm-chasers!)  The first day out of Birmingham we pulled into a Hampton Inn in Winfield, after changing our overnight plans from camping to hotel, due to strong storm warnings, a drenching downpour and tornado watch.  The ride from Winfield to Trace State Park in Mississippi, near the Elvis birthplace of Tupelo, MS, was relatively uneventful, despite the Mississippi state highway protocol for adding a foot-wide “rumble strip” immediately to the right edge of the white outer lane line, with almost no paved shoulder beyond- so essentially- no bike friendly shoulder.  The only close call was caused by a “double-wide” manufactured home on a semi-trailer, barreling past our group of riders and nearly clipping Jeanie as they pulled back to the right after passing.  The majority of drivers of all vehicles have been quite polite throughout our ride so far, usually passing our riders with a wide berth and minimal honks or other signs of annoyance.

Trace State Park provided us with a beautiful campsite on the lake with a “five star” campground restroom and shower facility (clean, well-lit, great hot water supply!).  We appreciate simple pleasures after a long day on the rode and bike saddles!  We were pleased to get our auxiliary battery/inverter system fully charged with the campsite electrical supply and cooked our first dinner so far this trip using our “induction” hotplate: brown rice/black beans/broccoli and salsa on flat bread.  Dessert was delicious strawberries and fresh pineapple.  We had only a couple brief showers during the early morning hours- so again escaped the severe weather predicted.  We went to sleep with a very bright half-moon casting a moon shadow and loud choruses of frogs (is it summer already?) lasting well into the night.

Friday morning March 2, we began the longest mileage day so far: 100 miles.  We were aiming for Hernando, Mississippi.  The van stayed close to the riders in case warnings of possible severe weather proved true as we navigated many turns on our Google map bike route designed to avoid the busier state routes.  Some roads were unmarked or had two or three names, making it a bit more challenging to find our planned route. The weather was sunny but very windy with strong storm systems and possible tornado warnings for the afternoon.  We wound along many beautiful country roads and passed through Holly Springs National Forest en route to Hernando.  The spring flower display continues to cheer us with beautiful daffodils, white flowering pear trees and some magnolias and redbud.

About noon we pulled over to meet Stephanie’s father Rich, and sister, Katie, and surprise guest Autumn, Stephanie’s devoted and adorable dog.  They had driven down from Napierville, Illinois, to join us for a couple days and with wonderful navigating found us on our winding back-roads route.  Rich jumped right on his bike and rode awhile with us before lunch, and next Katie took over as our honorary additional team member.  As we added them to our RASR team, a concerned local mom stopped us to say that local school children were being released early from school due to the severe weather warnings so we should be careful staying out in the weather.  We did our best to tune into the storm warnings on the radio and try to learn the location of the Mississippi counties targeted by the possible tornados, hail and severe thunderstorms.  Luckily, we were able to thread the needle between storm systems, and except for some brief showers and small hail, rode beyond danger to cooler temperatures, and less wind.  That afternoon there were apparently about 19 tornadoes sighted in the five or six state area including Mississippi. 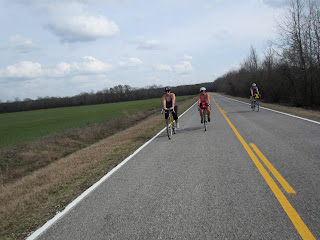 About 15 miles outside Hernando, Chelsea and Jeanie were met by Bo, founder of the Hernando Bicycle Club, who joined the ride into town.  About 6pm, now in the dark, we were joined by a police bike squad escort and rode into Hernando with a VIP welcome led by the police cruisers with lights flashing, stopping traffic for us at all intersections.  We were met by local press at the Hernando City Hall.  Mayor Chip Johnson texted his welcome and we moved to the lovely home of Shelly Johnstone, the Hernando Director of Community Development.

Police Officer Steve Tow came by later to drive us to The Spot for a welcome dinner and time to hear more about the Hernando success story in encouraging healthy lifestyles in their community with bike friendly and pedestrian friendly policies.  Hernando is a League of American Bicyclists Honorable Mention Bike Friendly Community and has Safe Routes to Schools programs in place.  They are justifiably proud of their complete streets policy and host year round “healthy living” events from health fairs to 5K/10K runs and an award-winning Farmers’ market.

Our gracious hostess Shelly, sent us off Saturday morning after a delicious breakfast of coffee, pastries and quiche from the local bakery “Lady Bug” and great ideas to share with other communities along our route.

We arrived by van at Frayser Community Center and Park in north Memphis to join a Bike Gala celebrating Memphis’ first Safe Routes to School award to Frayser Elementary school.  Kyle Wagenschutz and Anthony Siracusa of Revolutions Bike Co-op organized the celebration which included representatives from the mayor’s office, the Memphis Police Bike patrol, the Greenline project (working to create a bike trail circling the city of Memphis and over one of the bridges across the Mississippi), Revolutions Bike shop (a volunteer/member coop program which allows volunteers to earn a bike for a very modest registration fee and 10 volunteer hours), a bike safety “rodeo” including a “race” to see who can ride their bike the slowest, a bike obstacle course, and a bike and helmet giveaway raffle.  Our Ride America for Safe Routes team also had a table at the event.  We shared our enthusiasm for bike riding and experiences from our trip and gave away handouts listing the benefits of cycling, water bottles, and our favorite souvenirs so far- our keychain/bracelets that glow in the dark and include our website!

Memphis Mayor A C Wharton joined the event and shared his congratulations for Frayser Elementary and the bike gala.  He pledged his leadership to continue to make Memphis safer and healthier for all citizens so that anyone would feel safe enough to exercise in any part of the city, whether walking, running, biking or using public parks and recreation facilities.  He leads by example by running to his local gym at 430 am every morning!

Jeanie shared the Bike Gala podium as an “honored guest” after several other city officials.  She added our congratulations for the Frayser Safe Routes to School award, and explained the story behind our bike ride.  We spent the rest of our “day off” from riding having a great Mexican lunch and then cleaning our bikes at the Revolution shop before a short visit to the Decorative Metalwork Museum. An early to bed night at La Quinta to rest up for an early start on a 90+ mile ride crossing the Mississippi River and on to Jonesboro, Arkansas finished our day off. 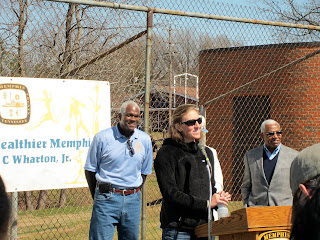 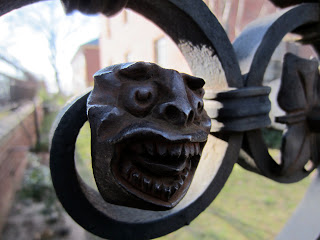