One thing I ponder often on the road is - the road.  By which I mean the road conditions.  Across the eastern half of the US we have ridden a wide variety of roads in a very wide variety of places.  We've ridden two-lane roads and eight-lane roads, separated highways and quiet country lanes, city streets and suburban ones, roads with wide shoulders or bike lanes and many with no shoulder at all, and every road surface from sand to gravel to cracked, potholed pavement to fresh, smooth tarmac.  We've also experienced the full gamut of traffic scenarios, from rush hour jams to no cars for miles.  Often our fellow road users are respectful and considerate and sometimes they yell and honk and gesture at us (you know the gesture I mean).

So with all this experience, in addition to advocating for safer roads, we are in a unique position to observe the "bike-friendliness" of the communities we pass through.  Granted, we only spend a day or occasionally two in each city or town, but we see the front and back end of each one, generally at rush hour, and at a speed that enables us to soak it all in.  We inevitably pass through wealthy and disadvantaged neighborhoods, commercial strips and industrial sections, and we deliberately ride through the heart of every downtown. We are working on compiling our observations into a new page for our website so stay tuned for our very scientific city-by-city bike-friendliness ratings.

In the meantime, here's an example:

Our last major stop was Oklahoma City.  We rode in on a Monday evening right around 5pm at the peak of rush hour.  I modified google map's meandering route that included at least one hundred turns to a more direct route that kept us on major roads for longer stretches.  Often when we're in traffic it's easier just to stay on the big road in the flow of traffic rather than having to constantly read signs and turn in and out of busy traffic to get to short stretches of less-trafficked road.  This particular time I'm not sure which would have been better as traffic on the bigger roads was bumper to bumper.  Don't despair, we're professionals and have expert methods for dealing with scenarios just like this (as we tell the kids in our school presentation - "don't try this at home").  Already covered in maximum reflective wear with helmets secured and lights flashing, we fall into flying isosceles formation and at an appropriate break in traffic we confidently turn onto the road and take the lane, signaling and moving predictably as any good driver would.  In this manner we crossed the northern suburbs of OKC, past the mcmansions of Nichols Hill, Lake Hefner Park (where seemingly all the cyclists in the city road on the off-road path) and miles of big box strip malls, to the more modest Bethany neighborhood.  Upon reaching our destination we agreed that we had just experienced some of the most unpleasant roads and traffic of the trip.  Not that anyone was rude particularly, we were just enveloped by noise and cars the entire trip across town, and the pavement was horrendous!  No bike lanes, no shoulders.

Happily OKC was redeemed in our eyes the next morning.  Yesterday we rode from the home of our fabulous hosts on the west side of the city through the downtown district to stop at the site of the Oklahoma City National Memorial.  (The Memorial pays tribute to the victims of the Oklahoma City bombing of 1995 and is a beautiful park, monument, and reflecting pool.  It made for a very poignant early morning stop on our way out of town.)  From the Memorial we rode straight south (guess which direction the wind was coming from!) through the business and industrial districts and out through some of the poorer neighborhoods to the south.  Much to our surprise we found bike route signs, sharrows, and even a separated bike path along this route.  These roads were also much less trafficked, despite it being morning rush hour.  We rode away from OKC with a much better feeling that morning, and found it interesting that the bike routes were not where we expected them to be.  I imagine the locals know better routes to take on the north end of town, but bike tourists beware!

Overall, I would rate Oklahoma City as "needs some work", with a few miles that were bike-friendly gems but many that were pretty terrible.


And now here's the rest of our update:  From OKC we passed through Norman, the home of OU, and stopped for lunch.  Cool town, lovely campus.  Jane is a satellite alum of OU so we had to document her making an actual campus visit.  After lunch we rode straight south for another 60 miles, into that wind that I mentioned.  20mph straight out of the south.  We had a few rolling hills and stands of trees to break it up so it wasn't quite as bad as crossing eastern Arkansas but it did slow us down.  We finally rolled into the one-stoplight town of Davis, OK right at sunset and were met by another amazing host couple from warmshowers - Larry and Kathy Ensminger.  They treated us to pizza and we camped out on the floor of their spa/fitness center business in the center of town. 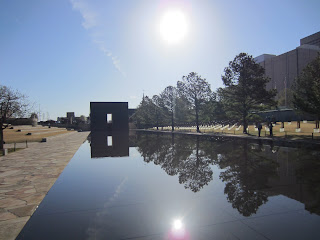 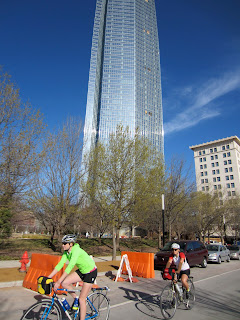 We left Davis extra early this morning with over a hundred miles planned to our next stop.  Our first 10 miles took us through Oklahoma's Arbuckle Mountains for a quick climb past Turner Falls.  From the Arbuckles we descended to rolling plains and were met again by our close friend the south wind.  We leaned into it until lunch, after which we had to jump in the van to catch up a few miles so that we could meet our afternoon riding companions from the Shawnee Trail Cycling Club. 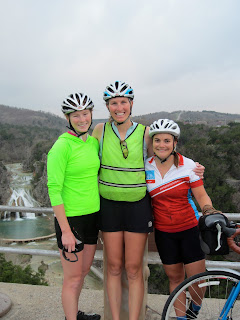 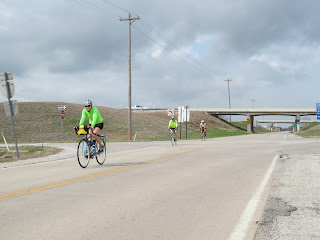 Today we crossed another major landmark - the Texas border!  We're going to be in the Republic for about three weeks so it's a big deal to finally be here.  It also felt like a bit of a homecoming for Jane, Jeanie, and Chelsea who lived in San Antonio on and off for most of Jane's career in the Air Force.  We're all looking forward to reconnecting with friends across the state.

We were met in Gunter, TX by Joel Hoback, the president of the Shawnee Trail Cycling Club, and another member of the club, Dina.  They led us - kindly breaking the wind! - through the northern satellite suburbs of Dallas, the "Metroplex", into Frisco, where their club is based.  Joel, Dina, and another club member Laura treated us to a delicious dinner and our first real tex-mex of the trip.  Homemade tortillas, chips, queso, and salsa, prickly pear margaritas... amazing!  While at dinner Frisco City Councilman Scott Johnson stopped by to welcome us to Frisco on behalf of the Mayor and chat about making Frisco a more bike-friendly community.  They've got their work cut out for them - Texans love their cars and trucks - but it sure sounded like they have the political will in the city to make it happen.  Thanks to Dina, Laura, and especially Joel for riding with us, treating us to dinner and soft beds for the night, and overall being amazing hosts in Frisco!  We're resting and recovering at a Fairfield Inn tonight for a grand tour of the Metroplex tomorrow.